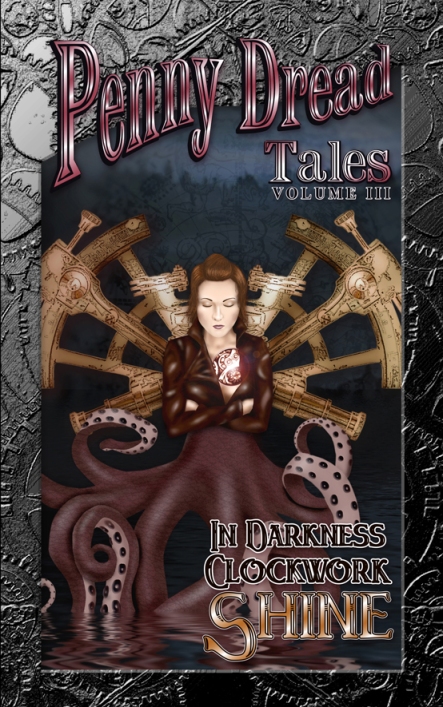 Check out this beautiful cover! My Brown short story, Brown Goes Full Steam Ahead will be in this Anthology releasing in ebook and print on March 28th! Yes, that’s only a few days away! If you’re going to Anomaly Con in Denver, you can get signed copies there. *hint hint*

I would recommend that any of my younger audience out there use discretion. My story is YA friendly but I haven’t read any of the other stories and I know it’s not a YA anthology.

Blurb:
In this tome, the third installment of the Penny Dread Tales series, we explore not only the darker side of steampunk but also the black, sullied underbelly of the human condition. The nightmare of Jack the Ripper stalks these pages… drenching them in blood… twice. Slavery, the murder of the weak and helpless, dire choices of life and death: these tragedies and more become fodder for the mind, where the possessed and dispossessed steal men’s lives, and in some cases, their souls. This volume is rich with shadowy settings shrouded in fog, and the ensuing brutality is glimpsed piecemeal through windows of moonlight where dark shadows hide nefarious villains plotting murder and mayhem upon unsuspecting victims. PDT3 carries the reader to the four corners of the Earth and beyond. It traverses the centuries, from the Victorian era all the way into a future 40,000 years distant. It is an exploration of mankind’s darkest dreams and nightmares, and in its reading you too may experience nightmares where might In Darkness Clockwork Shine.

Excerpt from Brown Goes Full Steam Ahead:
Arnault laughed. “Don’t think the passengers would appreciate me bringing sheep on board. Well, maybe you can spend a half an hour a night entertaining passengers. I’ll even pay you for your trouble, and give you room and board for you and your dog, same as I do other performers. You banish this ghost for me and I’ll pay you a whole lot more.”
“Thank you, sir. I’d be happy to help. When will the ship be back to St. Louis? I have my horses and wagon at the livery and I need to make arrangements.”
I stopped listening to the humans while they made arrangements. A white and black bird hopped down the rail, tilting its head this way and that as it got closer.
I stared at the bird and it ruffled its feathers.
“No need to be rude,” it squawked.
“Sorry.” I sat down and looked away for a moment. I’d never had a bird talk to me before. “What do you want?”
“What makes you think I want something?” The bird stretched out a wing and plucked at its feathers.
“Usually birds want something when they get close.”
“Ahh. I just heard you talking about the ghost. This is my ship and I’ve met the ghost before. Foul temper. You’re going to get rid of it?”
“Yes. I hunt ghosts. What does the ghost do? And how is this your ship? I thought it was the Captain’s?”
The bird squawked laughter. “He thinks it’s his, but really it’s mine. I’ve sailed on it longer than he has after all.”
I tilted my head, trying to understand how a bird could own a ship, but finally I gave up. If the bird wanted the ship, who was I to argue?
“As for the ghost. Well, mostly it scares the patrons by making weird sounds at night, chasing ladies and stealing their hair brushes, messing up performances, It’s quite entertaining.” The bird preened.
“Damn seagull,” The captain said. He stalked forward and waved his hat at the bird.
The seagull squawked and flapped away, yelling curses that would have turned the captain’s ears red if he could have understood them.