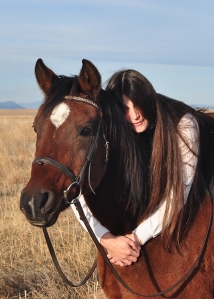 When Julie is not writing she’s often out riding horses, or working sheep with her dogs. She lives in Colorado with a handful of cats, some sheep, Kira and Bran her border collies, her Arabian endurance horses Triska and Cavalier, and her Irish Sailor. She is the author of many Vampire and Ghost-Hunting Dog stories the Tales of the Travelers series, and many other young adult books. her passions include horses, writing about horses, dogs and writing about dogs. She writes fantasy, sci fi, horror, and all related genres. She’s a member of the Horror Writers Association, Science Fiction Writers of America, and the Dog Writers of America Association and the editor for Story Emporium fiction magazine. Find out more at http://www.writerjacampbell.com

My writing inspiration and life.

Julie was born in Iowa in a pumpkin patch next to the Duck Creek mall.  Her parents were out Christmas shopping one day and stopped by.  Somehow she managed to fool them into taking her home.  They put her under the Christmas tree where she turned into a baby.  Baffled, her parents have never since bought a pumpkin for Christmas, though she does have one other sibling, a younger sister who was born in the spring 6.5 years later.

She moved to Ohio with her family when she was young where she met one of her BFF’s and spent the better part of 14 years.  She grew up around boats and spent as much time with horses as she could.  She doesn’t remember learning to ride and has since concluded that she probably learned to ride before she was born.

She learned to be a voracious reader after she and her BFF hated each other for a summer.  Her BFF spent the summer reading, and once they were BFFs again the next school year, Julie picked up the habit.

Her first masterpiece was a picture book about Willy the Bookworm.  Amazingly enough, this masterpiece survives today, and she even thinks she knows where it is.  This was followed by many Nancy Drew style mysteries in elementary school, followed by a longer science fiction piece in high school.  She never intended to be a writer, she was going to be a paleontologist.  Her 6th grade reading teacher was the first person that planted the seed in Julie’s head that she was going to be a writer some day.  Thanks Mrs. Fox… it’s not all your fault, but you sure helped the process along.   Julie didn’t believe her at the time, but she believes her now.

In college Julie studied Geological Engineering at the Colorado School of Mines until she found out she could get a degree in horses.  Firmly set on that plan, she moved to Fort Collins and got her BS in Equine Science.  After she graduated, she naturally got a job working in the computer/internet industry.

She’s had many jobs over the last few years but a few things have remained consistent in her life: her love for horses and her passion for writing.

Julie has several critters in her life.  Her first cat Tux, a polydactyl black and white barn cat, claimed her when he was a kitten.  He allowed her to bring him home when he was 8 weeks old from the barn she later bought her horse from.  Six months later he decided he wanted a playmate and Sabaska (Julie’s horse) was just a little to big for him so he sent Julie to the pet store.  She thought she was going for fish food and came home – a bit confused – with an adopted kitten from a local rescue.  Tux was pleased.  Solstice, the crazy calico, was also pleased and they began to plan for world domination.

Several years later Julie was again claimed by another cat.  Sophie, a beautiful tabby, worked her way into Julie’s life.  Tux and Solstice were not pleased, but over time they grew used to her, and while they don’t include her in their plans for world domination, they do play with her now and again.

In June of 2010, Kira, a border collie puppy arrived in her home with the intent of foiling the world domination that was brewing from the cat trees.  She has succeeded in disrupting those plans, but only time will tell if her mission was successful. In 2015 Kira added a recruit to her plans. Bran, another border collie puppy arrived in the world, ready to take it over with his cute freckly nose.

Sadly, Sabaska crossed the rainbow bridge in 2013 and six months later another Arabian horse came into Julie’s life. Triska is a rescue horse from Montana and has managed to fill Sabaska’s shoes as an amazing trail horse and companion.

Julie lives in northern Colorado with her horde and her significant other, the Irish Sailor.