Hunter of the Dead

In the near future everyone lives in fear of the Horde—disease-riddled zombies who threaten to consume what’s left of humanity.

A girl named Hunter lost her family to them, like countless others. When strangers come to her village, claiming to control the Horde, Hunter and her people refuse to meet their demands—until the strangers steal their secret weapon; the young T. rex Hunter raised, named Ali. She is the only friend Hunter has left and nothing will stop her from rescuing the dinosaur…and maybe even destroying the Horde threatening their village once and for all.

With a little help from a pack of utahraptors, she might even survive.

Jada of the Raptors

Fleeing forced marriage and subjugation to the man who murdered her husband, Jada escapes into the wilderness – even though she’s ill-prepared to survive on her own. Jada knows she needs help, but refuses to go back to humanity, so she turns to the wilderness’ greatest survivors: a pack of Utahraptors. Genetically engineered, then freed during the war that destroyed civilization, the dinosaurs are her only hope. If they don’t kill her first.

Doc has everything a border collie could possibly wish for. Two humans he loves, sheep to herd every day, squirrels to chase… until one terrible night changes everything. A vampire kills his humans, banishing Doc to a sheep-less new life in the city.
Out for revenge, Doc has to hunt for clues while avoiding both the Stray Gang and the Catcher, all while keeping his quest a secret from his new human.
His luck finally changes when he finds a kitten named Mika, who reeks of vampire. Together with some two-legged help, Doc and Mika must track down and stop the vampires once and for all.

These ghosts don’t stand a chance…

From the beginning of time to the distant future, special animals of all species have answered the call to fight evil.

From dogs and cats to birds, horses, even dinosaurs, and one unusual fish, these spirited tales of ghost hunting adventures will thrill and delight readers.

In the war-torn skies of Trinity, the crew of the pirate airship Serpent Queen try to leave the past behind.

But the past doesn’t always stay dead, not even for the youngest crew member. Captain Adair’s ten-year-old ward, Pint, may still be a child, but she’s also a gifted weather mage and secretly the last heir to a noble family.

Pint’s gift sets her apart from ordinary children, and attracts unwanted attention when the Serpent Queen docks near her homeland for repairs.

When she’s kidnapped by a group of rebels, Pint has to keep her wits about her to survive the deadly game of the great houses that destroyed her family. Captain Adair races to find her before it’s too late-only to discover his past has found him, as well.

Join Brown and her friends for more adventures in this second collection of ghost hunting fun. When she’s not busy herding sheep, she uses her border collie eye to keep wayward spirits in line, whether it’s banishing ghosts or solving murders. From abandoned forts, to haunted hotels, with Brown’s nose for trouble she’s always the dog for the job. This collection has nine action filled short stories perfect for anyone who loves dogs or a ghostly tale. 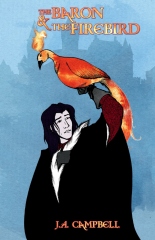 The Baron and the Firebird
Amazon

From the depths of the frozen Russian winters to the crowded streets of New York, Vampire Baron Pytor Vasilyev seeks the Firebird-a legendary creature whose gift centuries ago granted him a life in the sun, and the ability to serve his people. Though they parted ways long ago, she hasn’t left his thoughts or his heart, and he searches through the years, hoping to find her once again.

Aether gas: lighter than air, and more valuable than gold. It gives the mighty airships the ability to fly. Without it, the delicate balance between magic,

technology, and nations would crumble.

The pirate ship Serpent Queen doesn’t much care for the balance of nations, except when it affects her profit. So when Captain Adair is hired to smuggle a load of aether gas into Tribunal lands for a rebel group, the crew is happy to do it-as long as they get paid.

It’s a bonus that most of them have been wronged by the Tribunal in the past and this may be a way to unbalance the tyrants.

The Toymaker
Amazon Every winter Nicholas journeys to the city to sell his clever mechanical toys. This year is no different, except a snowstorm delays his return to his ailing wife. When he is finally able to travel, he meets people who guide him toward a new, and promising calling.

Brown, Ghost Hunting Dog
Amazon
Have a ghost problem? Brown is the dog for the job. Normally used to herd sheep, her Border Collie Eye works on ghosts, too. Follow her adventures as she and her human, Elliott, hunt ghosts all over the old west. They find their first real ghost in a saloon in Miller, Colorado, and from there her nose leads her to more adventures. Brown fights ghosts on trains, boats, and in old mines. She discovers that some ghosts are friendly when she and Elliott need extra help fighting a magical construct. There may be friendly ghosts, but there are no friendly Martians, and Brown has to take the ultimate adventure to save Elliott from their nefarious clutches, meeting new friends along the way. Packed full of adventure, this weird western anthology contains seven short stories and one never before published novella.

The Moths of Miller Place
Amazon