I’m super excited to have my friend and fellow Decadent author swing by my website on her release tour for her young adult novel Pretty Souls. 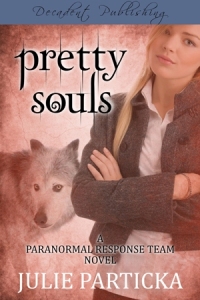 You are stopping by on a release tour for your next book.  Tell us a little bit about it.

Pretty Souls is a young adult urban fantasy that follows Elle, a teen werewolf, and her half-vampire foster sister, Cass. They sneak out at night to keep the local supernatural population in line, but one night they find the quarterback wandering around like a living zombie. Add a bloody altar at a nearby cemetery and more mindless people, and our heroines are facing big-time trouble. Add in tutors, bullies, first love, betrayal, and foster parents into the mix, and Elle doesn’t know who to trust or where to turn, especially not when she has to battle daily with the beast that shares her body.

Could you tell us a little more about your day-to-day life?

While I used to be a lab tech and a high school science teacher, I’m now a stay-at-home mom to my two kids. I work on other business aspects of writing in the morning while my daughter is still home. Once she’s off to school, I get to work on actual writing work (blogs, stories, editing). When the kids get home, I’m back on Mom-duty until they are in bed. I often try to squeeze in an hour or two of writing time after everyone else is in bed.

Do any of your novels have special stories involved in their writing?

I don’t know if it’s special, but the story behind the conception of Pretty Souls goes like this…

My husband and I were watching a show called The Middleman (horribly under-rated show, cheesy and made fun of itself at every turn, but I digress). It’s tagline was “Saving the world so you don’t have to”, which was also the tagline for the Elite Hands of Justice series by a former member of my writing group, A.J. Menden. So my husband and I started joking about taglines and I rattled off “Saving the world before breakfast” and something about it clicked in my head. I wrote it down and stuck it on the wall over my desk. Every day I looked at it, and then one day everything started to fall into place. It would have to be a young adult story, fairly snarky. Once I had Cass and Elle in place, it was all over. Everything flowed like water.

How long did it take you to write your first novel?

My first completed novel took eleven months to finish. I started it for National Novel Writing Month 2007 and finished it about a month before NaNoWriMo 2008 (which is when I first wrote Pretty Souls—I finished the first draft of that book in about 40 days).

What’s your opinion on writer’s block?

This one’s going to get me in trouble LOL. I believe it’s possible to hit a point in a story where the words aren’t coming. In my opinion, that often means the writer is too close to the story or that they’ve taken a wrong turn in telling it. At that point, it’s shove through it or work on something else. There are also times when a writer’s life can block inspiration, but again, I think it’s the writer’s choice to wallow in that or push through it. (To be fair, I’ve done my share of wallowing. I just don’t believe it’s something totally outside the writer.)

How many novels have you written and which is your favorite?

I have completed drafts of five novels, started (50% or better) drafts of three more. In addition, I’ve written two novellas and more short stories and flash fiction than I can count.

Are you currently working on any projects? Can you tell us about them?

I have a few YA projects at various stages of completion. The second Paranormal Response Team novel is very roughly drafted. To be fair, it needs a complete re-write, but the bones are there. I also have another series with the first novel finished. And just recently a new idea for a post-apocalyptic (very dark, perhaps too dark) hit me over the head. It’s only in the concept stages right now, but I have high hopes for it.

Do you have any advice for aspiring writers?

Write a lot and read even more. Read fiction in and out of your chosen genre. Read books on the craft. Learn about the business before you try to break in. Study how to write queries and synopses. Learn about the realities of the profession. It isn’t a quick road to wealth, and it requires a lot more work than just writing the book. And make sure you find a great critique group or partner willing to beat you up. You need a thick skin to make it in the industry.

I am literally all over the internet and I love to talk to people. Feel free to visit me at my website or blog, follow me on Twitter or like my facebook page. I try to interact as much as I can with people (though I will say the blog and Twitter are the most interactive for me). I hope you check out Pretty Souls. Thanks to Julie for having me here, and thank you for reading. 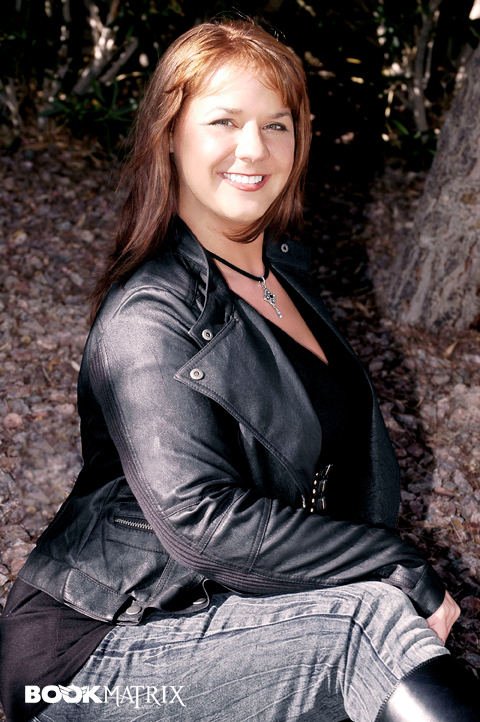 Julie grew up writing, as so many people do, but gave it up to study chemistry and become a teacher. One of her students told her she should be a writer, and that bit of encouragement stays with her to this day.

No longer teaching, Julie now splits her time between raising her own kids and living in the world of her imagination (where her children occasionally visit). They reside in southwest Michigan with her wonderful (and very patient) husband and two faithful dogs who like to sleep on her feet and occasionally drop tennis balls on her keyboard when she writes. All in the name of love.

And our tea of the week is Celestial Seasonings Echinacea Complete Care.  This tea is full of all sorts of stuff that is good for the immune system like, echinacea, vit C, zinc, and soothing eucalyptus and peppermint.  The flavour is complex and it really does seem to help.  Why am I highlighting this tea this week? ‘Cause the Irish Sailor is sick and I’m drinking it to try and avoid also getting sick.  I’ve used it in the past and it really does seem to help.   It also tastes great, though I tend to add a fair amount of sugar to this one.

Thanks for dropping in everyone!

23 Responses to Friday Tea Time and Interview with Julie Particka