Oh… there you are…

I’m not dead, though I’ve felt that way off and on. It’s been crazy, I haven’t been sleeping well, but, now most of that stress is gone. I slept like a rock last night, and had this really awesome, vivid, dream. Two people, who could have been right out of a western except that the female was the Captain of whatever fighting group they were part of, were finally able to make their way home. Part of the dream was the struggle of their journey home and then part of it was the tragedy they encountered when they reached their home. Then I finally had to get up. I’ll have to keep the events of the dream in mind for future stories though.

It’s spring break. Yay for students… chaos for my work. In “real life” I drive an airport shuttle. It’s fun. I get to hear great stories, and we have great passengers. Some of them even are interested in my stories. But that means that during spring break we get swamped… especially when they don’t stagger the spring breaks like they normally do. Sigh. At least that means the chaos is over faster.

On top of all that, I actually get to do something fun. I found out about Anomaly Con: http://anomalycon.com/ last week. I’m going with some friends. I’m dusting off my Airship Pirate costume from Halloween for the daytime and for the ball Saturday night my talented friend at Night Lily Design, Kimberly Carmen is helping me make some awesome gloves and design a costume out of mostly preexisting parts. It’s not very victorian, but it does pull off Pirate trying to be respectable. LOL. I made a necklace to go with it. 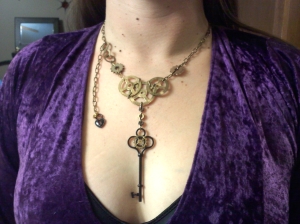 and my Airship Pirate

2 Responses to Oh… there you are…