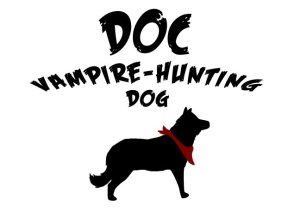 Those of you who know Ekatarine, aka Kat, and Doc might wonder what possessed me to put the two of them in the same room together. Believe it or not, despite Kat being a vampire, they both have some common ground. They both really enjoy hunting vampires. I thought it might be fun to see what they had to say to each other.

Kat: Hi pooch. *looks at me* So where’s the other vampire hunter?

Me: Kat, this is Doc. He’s a Border Collie, don’t look him in the eye. He hunts vampires.

Kat: Yes. You noticed. Good job. So, how do you hunt vampires?

Doc: I’m not telling a dead thing how I kill dead things.

Kat: *glances at me*

Me: *Shrug* Doc, this is going to be a really short interview if you don’t talk to Kat.

Kat: I hunt vampires too. Mostly I just fight them and stake them, cut off their heads, shoot them full of holes. I’ve ripped out a few hearts. Stuff like that.

And the tea of the week. Tension Tamer. For those tough interviews you just have to get through. (I know we did this one already, but it was too appropriate.)

You can also find me posting over here at the Echelon Explorations blog today: http://echelonexploration.wordpress.com

10 Responses to Friday Tea Time With Kat and Doc